Book Blurb: Can a kidnapped fairy and a human find love despite all odds? 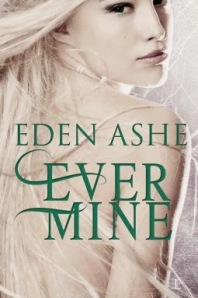 Nathan Alexander’s batty aunt has done it again. This time she’s sent him a rare plant he doesn’t want. Imagine his surprise when he finds a kidnapped fairy hidden within its leaves. As a man who heads a non-profit organization for abused women and children, Nathan makes it his mission to help her find her way home.
All her life Katenia was warned about the evilness of humans. Never was that proved more true than when she was kidnapped from her quiet valley home. Thrust into the human world, Katenia must fight her very instincts to trust Nathan if she ever hopes to return to her rightful place…and to her normal thumb-sized fairy form.
But with their lives in danger, finding home…and love…will be a journey worthy of a fairy tale.

EVER MINE opens with an energetic delightfulness that had me believing this erotic novella was a romantic comedy. Nathan and Katenia have immediate sexual chemistry, but it’s their antics trying to understand their strange situation and each other that grabbed my interest, and my funny bone. Nathan’s human. Katenia is a fairy he encounters when his aunt sends him a strange potted flower, which happens to be Katenia’s home. When tiny Katenia suddenly becomes “human,” Nathan determines to help her regain her fairy wings so she can return to her family. Except that he’s inexplicably drawn to her and deep in his soul, he doesn’t want her to leave. Then, he learns that in her home world, Katenia will be forced to marry a cruel fairy or face banishment. Now, Nathan will do anything it takes to keep his fairy princess from either of those horrible fates.

Katenia isn’t the only one facing a precarious future. Turns out, Nathan’s former fiancé, Rhiannon, is an evil witch who cursed him when he called off their wedding. A curse in which no one he loves will ever live long enough to love him back.

And this is where the story began to unravel a little, for me. News of the curse comes in the last quarter of the story. There wasn’t a hint of it earlier so the reveal that Rhiannon was a witch and that Nathan was living with a terrible curse seemed like a forced plot point. I also didn’t find the dynamics between Nathan and his aunt and uncle were fully developed so their actions felt contrived. As did Nathan’s rage and anger which when mentioned seemed disproportionate to what was happening in the story most of the time and there wasn’t an adequate explanation as to why he had this particular character trait, nor was it satisfactorily resolved in the end—for me. This darkness within him did help him to defeat Rhiannon but seemed incongruent with the buoyancy and vibrancy of the set-up.

If you like fantastical, modern-day fairy tales and are looking for something quick to read on your lunch break, or sitting in a waiting room, this could be the novella for you.

Grab your copy @ AMAZON     B&N
Author Scoop: EDEN ASHE ~ Convinced dragons have gotten a bad rep throughout time, and more than a little addicted to fairy tales and romance novels, Eden Ashe has decided to re-write history. In her version, the dragons are ancient warriors in tarnished armor, who not only deserve the girl in the end, but will fight forever for her.  To learn more about EDEN and her books visit www.edenashe.com

This book was provided by the publisher via Net Galley for an honest review. No other compensation was offered or received.