Today, we’re happy to be participating in the cover reveal for L.J. Sealey’s second book in her paranormal romance series: Dark Deliverance. To be released June/July. And don’t miss the rafflecopter giveaway of 2 eBook copies of Awaken (Divine Hunter #1).

Sometimes you just have to go to Hell and back. . .

Forced apart, Lacy and Michael are now living very different lives. Michael is in Kentucky fighting demons and searching for a way to save his friend but even with the help of new allies he is hitting nothing but dead ends. Faced with no other choice, Michael returns to Hell and is determined to save Evo and put an end to his enemy so he can be reunited with the woman who holds his heart.

Lacy is trying to piece her life back together in Oakland but is struggling to fill the void that is almost tearing her apart. Just as she’s about to hit rock bottom, a new friend could hold the key to reuniting her with Michael. But at what cost?

Both find themselves in less than perfect circumstances. The repercussions of which lead them to discover a new threat born of Varesh and his growing army of demons: a new weapon, and a new plan that will ultimately lead to the end of the world as they know it. Will Michael’s new power be enough to destroy Varesh and protect not only the people he cares about, but also the rest of humanity?

AWAKEN, Book 1 in the Divine Hunter series, is currently on offer on Kindle, iBooks, Kobo, and Barnes and Noble. 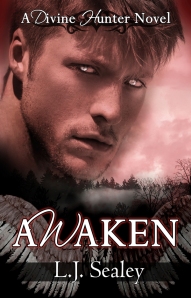 L.J. Sealey was born and raised in a little Welsh town by the sea. It rains a lot, so she often has a great excuse to sit at her writing desk and while away the hours at her laptop.

She still lives in N.Wales and when she’s not travelling around the country working with her husband – who is a professional singer – or singing backup vocals herself, she likes to read and watch her favourite TV shows which normally includes plenty of CSI, The Vampire Diaries and endless amounts of sitcoms. Being addicted to reading about vampires, demons, shifters and angels, she has always had a thing for all things paranormal and is a big sucker for impossible love stories. So it was inevitable that when she started writing herself she would mix the two together.