Last summer while on a trip, I become intrigued by the riveting ads for a TV series scheduled to debut that fall. So of course I texted Prof. X (aka: the hubster) to set the DVR. He’s very adept at keeping track of my whimsies. Thank gaaawd! Because I really do have a HEY LOOK—A SQUIRREL attention span.

Anyway, Prof. X wasn’t surprised that by the time the show actually aired, I had completely forgotten about it and therefore had lost my enthusiasm to watch it. When he reminded me why I had asked him to DVR it in the first place, I yawned and asked what else was on. So, he refreshed me on a TV viewing rule that I didn’t even know we had. Personally, I think he made up the rule on the spot, taking advantage of my HEY LOOK—A SQUIRREL disorder. Still, he held fast to this newly implemented policy called the Three Episode Ruling, which basically means we give a television show three episodes to shock-and-awe us. 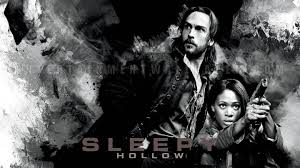 Turns out we didn’t need the rule to keep us watching– SLEEPY HOLLOW.  Washington Irving likely never imagined his tale would take such leaps as to land in a 21st century apocalyptic, fantastical, supernatural crime-solving romance on prime time-must see TV. Yep, that’s right. I called it a romance and I’ll get to that in a moment.

On a secret mission for General Washington, Ichabod is caught in battle with the Redcoats, but in the reality of the story, they weren’t Englishmen, but zombie-like soldiers controlled by Moloch, the demon wanting to unleash the Four Horsemen of the Apocalypse. During the intense fighting, Ichabod beheads a Hessian soldier, who is one of the Horsemen. However, Ichabod is also fatally wounded. His wife, Katrina is a witch who casts a spell that saves Ichabod’s life but puts him in stasis for over 200 hundred years. Unfortunately, the Hessian soldier’s life-force is bound to Ichabod’s life because their blood mingled on the battlefield.  When someone summons the Hessian from his grave, the resurrection also revives Ichabod and he’s forced to team up with Lt. Abbie Mills to end the killing spree the Horseman embarks upon. 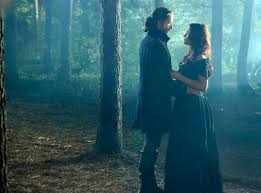 I mentioned before that SLEEPY HOLLOW is a romance. Not because of any sexual interests between Ichabod and Abbie. They are reluctant partners who eventually become friends, but not lovers. Ichabod’s heart belongs to Katrina. And he will move heaven and earth and hell itself to free her from the curse that has bound her to purgatory. And that is why I consider this a romance. Ichabod might be trying to save the world but he’s equally adamant about saving Katrina. Theirs is a love that transcends time and space and circumstance. Ichabod has a destiny which he intends to fulfill, but somehow, some way he’s going to make sure he and Katrina are reunited.

What I love about this show is the imaginative twist on a legend that I cut my teeth on. Seriously, the show is so outside of Irving’s The Legend of Sleepy Hollow that the original story is hardly recognizable and so is American history.  Accordingly, viewers should whole-heartedly embrace that the fate of the world depended on the outcome of the American Revolutionary War. And that the Boston Tea Party was simply a cover-up for one of Ichabod’s missions. A secret mission given to him by General George Washington. Yep, that’s right.

The first President of the United States was a warrior in a clandestine society pledged to thwart the End of Days by destroying the Four Horsemen of the Apocalypse.

Wow! It kinda gave me the same feeling I got when I learned Abraham Lincoln was a vampire hunter. It’s a like a tingling of my spidey senses, preposterous to believe and yet I can’t help but wonder, is it possible?

SLEEPY HOLLOW is so well-written that it is an easy task to suspend disbelief at the over-the-top storyline and the diverse characters, rich in essence, quirky, and down-right genuine in their motivations seem like the type of people that I would gravitate toward, outside a fictional world.

SLEEPY HOLLOW smartly delivers enchanting and stimulating entertainment and I’m thrilled that the FOX network has renewed for next season. If you don’t have it programmed into your DVR—do so now!

What historical figure (or fictional historical character) would you like to see reinvented and thrown into paranormal or urban fantasy world?

11 thoughts on “Sleepy Hollow~ Ground Zero for the Apocalypse?”