Today, we’re happy to be participating in the Lying with Scorpions Virtual Book Tour!
Click the banner below for more tour stops.

Note: I fell in love with Kendras in Scorpion. Find my post here.

Please welcome Aleks to the blog!

Hi, thanks for hosting me!

I’m Aleksandr Voinov and I’m here to talk about my newest release, Lying with Scorpions, which is he sequel to Scorpion and part of the Memory of Scorpions gay military fantasy trilogy. I’ll be checking in to answer any questions you might have, so feel free to ask questions in the comments. At the end of the post, you’ll find more information and details for a backlist giveaway. Good luck! 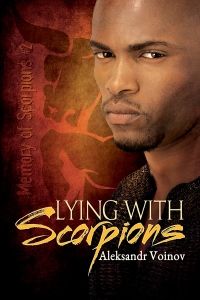 If you lie with scorpions, you’d better have a taste for poison.

Now that Kendras’s lover Adrastes has claimed the throne of Dalman, Kendras is tangled deeper than ever in politics and intrigue. As the new leader of the Scorpions and Adrastes’s one true friend, he and his men stand between Adrastes and those who wish him dead.

And many do. Adrastes openly challenges the ocean priesthood for power while establishing himself at court and brokering with the realm’s various factions. He means for the Scorpions to become a fearsome legion again, but Kendras must first learn how to be a good officer and recruit to replace the fallen. His choices will determine the future of a group steeped in hundreds of years of history and tradition.

As both Kendras and Adrastes settle old scores, a new enemy arises in Commander Graukar, a war hero loyal to the old order. In his formidable mountain fortress, Graukar may hold the balance of power. But while Adrastes aims to either rule or destroy Graukar, Kendras finds himself doubting Adrastes for the first time, and sharing more with Graukar than he ever thought possible.

Aleksandr has been published for twenty years, both in print and ebook. He has ten years’ experience as a writing coach, book doctor, and writing teacher, and he works as a financial editor in London.

After co-authoring the M/M military cult classic Special Forces, Aleksandr embarked on a quest to write edgy, dark, sometimes literary M/M and gay fiction (much of which is romance/erotica)—the only way he can use his American Literature degree these days.

He’s been published with Heyne/Random House, Carina Press, Samhain Publishing, and others.

To win an ebook from my backlist (not Lying with Scorpions), email me at vashtan@gmail.com with the answer to the following questions (and your preferred file format):

– Name the Scorpions that join Kendras’s unit in this book

– What is Runner’s secret?

– Who was the first officer of the Scorpions, and what happened to him?

Coke, Pepsi or other?

Charlee here again. I don’t know about you, but I find that unexplained answer of “other” very intriguing. I do love a good mystery.

Thanks for being here, Alexsandr!