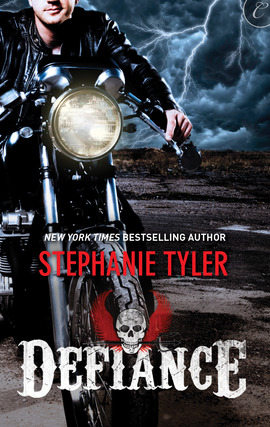 No it isn’t a Jeopardy answer. It’s how Stephanie Tyler (on her website) describes her new Defiance series. Defiance (Book One) is a new adult, post apocalyptic romance. It’s set in a motorcycle club that has become a safe haven for its members in a future recovering from a meteor strike. The meteor threw debris into the air, blocking out the sun, and set off a series of environmental disasters that leaves the world in the dark.

This is not a wasteland setting. Civilization has survived and some basic services are online. But the darkness creates all sorts of problems and the storms that come regularly make it a dangerous time. It’s a world that capitalizes on the brutal but fascinating world of motorcycle clubs. The disaster has only made the MCs more brutal and restrictive to the women in their world.

My favorite trope and all sorts of themes wrapped into a complex story that is a breeze to read.
Defiance wraps together themes of heritage, coming home, the battle of the sexes, and because it is new adult, the battle between generations and taking on the mantle of responsibility and adulthood. There is so much in this book I could talk endlessly on any of these themes, but the core of the story is the romance between Caspar and Tru. They’ve wanted each other since childhood (my favorite trope), but both left the club before the meteor strike and the Chaos that followed. Now they are back and together they are taking on everything wrong in the club and taking on each other as well.

The hero is sexy and the kind of man you’d cross the street to avoid.
Caspar is a tough, brutal man. He would be hard to love if we didn’t see that he is trying to change his world from within. And of course we see that his only weakness is Tru. To read this story you have to be able to tolerate a little “me man, you woman” caveman behavior and maybe even find it sexy despite the fact that you probably wouldn’t tolerate it in real life.

The heroine is trouble, but it’s not really her fault.
Tru  proves herself to be tough enough to be Caspar’s woman. As reader we can see this from the beginning, but Tru herself falters, often. Her ‘flaw’ is a tendency to run from trouble and that means she lets Caspar down over and over as she learns to stop running. Normally I’d find this pretty annoying, but I think I was more forgiving because Tru is young (thus the new adult), she is often left inthe dark(figuratively) not knowing what Caspar is up to, and she never really runs far or long in the book. She doesn’t sneak out of the MC or hide anywhere, instead she fails to ‘be there’ when Caspar need her to be. I found this more forgivable.

Hints of more awesome to come.
This book also introduces Bishop and Mathias. Mathias is the hero of the second book in the series, which I’ll be reviewing in a few days, so I won’t say much more about him except that I adore him. I suspect Bishop will be the hero of the third book.

The wrap.
To sum up, this is a fascinating world I can’t wait to revisit and the romance is intense, sexy, and wrenching. When I dove into this story nothing else seemed to matter. It took me deep into a place of feeling, loving, hurting, and needing desperately for things to work out. If you are okay with the brutal subculture (Caspar is protective not abusive, but the same cannot be said of others)then I highly recommend Defiance.

One last note: Defiance was recently nominated for the RT Reviewer’s Choice Award in the New Adult category.

The blurb:  Rebelling against her legacy as the MC’s princess, Tru Tennyson escaped the ruthless, male-dominated culture of the Defiance motorcycle club. Three years later, her newfound freedom is ripped away, thanks to a massive hybrid storm that killed millions. Now, in the post-Chaos world of semi-darkness and near-total anarchy where gangs rule, she discovers the dangerous world of Defiance may be the one thing that can keep her safe.

Tru is at the MC’s mercy when she’s dragged back to her former home…and to the only man she’s ever pictured a future with. Caspar is the bastard son of the club’s leader, her safe haven when life got rough–and her onetime lover the night she left. When Tru refuses to trade sex for power and be claimed by a rival club leader, she also dares to announce she wants Caspar instead, throwing the MC into turmoil.

Tru’s brazen revolt could start a gang war and destroy the club from within. Now both Tru and the MC must wait for Caspar’s response…and the inevitable fallout.

This book was purchased by the reviewer.

9 thoughts on “What is Sons of Anarchy meets the Apocalypse?”