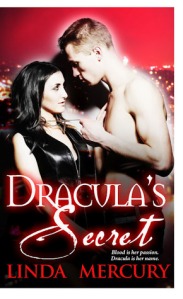 This is a different take on Vladimir aka Dracula.  Vlad is actually Valerie, the daughter of Vlad in the house of Beserab.  Not needing another female mouth to feed she would have been disposed of, but the minutes old daughter showed strength and determination so the father spared her and raised her as a man.

It was hard to wrap my head around the concept of Dracula actually being female but raised as a male.   She/he trained as a soldier, and married a woman.  A very modern take on a scene set in Wallachia 1431.    Throughout Dracula’s Secret there are many flashbacks from her birth, to Nazi times, to present day.  Yep Val has been around aloooong time.

Not only is the gender bender unique in Dracula’s Secret, there is also an entire were community involved.  Not just were wolves either; there are bears, and tigers and more oh my!

The most intriguing part of Dracula’s Secret is that in the whole world there are only 3 vampires left.  Two of them are brother and sister, he doesn’t know she’s alive and she wants to kill him.  AND the brother wants to kill the sister’s lover, who happens to be an ex military chaplain who runs a homeless shelter that recently allowed were’s to enter along with the humans.  This is a huge turning point in the were community.  So Mr. Ex Military Chaplain Homeless Shelter Guy, whose name is Lance, now has a target on head.

The whole were vs human community is in an uproar, and what’s left of the vampire community is full of greed and power.

I also liked the fact that Valerie/Vlad, Lance, and Radu (Valerie’s brother) are all well developed characters, the story is face paced, and there’s lots of action.

So if you want a new twist on the whole Dracula story which includes: Gender bending, hot sex, were’s, conspiracies, some awesome fight scenes, you won’t be disappointed in Dracula’s Secret.

This is book one of the Blood Wing series by Linda Mercury.  The next in the series is:  Dracula’s Desires, and Dracula Unleashed.

Blush Quotient: RED (Some other reviews would say this has eroticism in it but not in my opinion.  The love scenes are explicit though.)

We received this book for free from the author for an honest review.