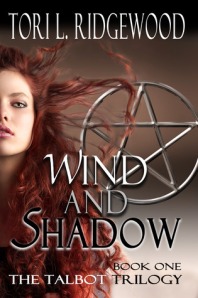 Rayvin Woods is a witch dealing with a tragic past; the loss of her mother and  still being accused of a crime she was acquitted for years ago.  Forced due to circumstance, back to the town she never wanted to set foot in again.  She has to face her fears, an evil vampire, and a lost love.

When I shut this book upon completing it I was left with the thought, damn now I have to wait for the sequel.  That’s the best sign and compliment an author could ever ask for in my opinion.  At least from me.  Wind and Shadow surprised me in many ways.  This is no YA novel that is for sure.  There’s a lot of steamy and sometimes freaky things going on in the story and not just because it is filled with vampires and witches.

Ravyn is a well written character, the reasons she behaves the way she does is fully explained.  She has really lead a tragic life, I was really rooting for her to find some peace and happiness.  It took me a while to warm up to Grant but eventually I did. He’s kind of a typical male, needs a good kick in the ass to see straight.  The heat between Ravyn and Grant is intense which means sexy witch plus hot police officer equals officer down, but in a  naughty way (wink, wink).

The vile vampire de Sade, I don’t know what else to say other than I want to stake his pervy ass back to hell.  He’s an evil SOB with a very bad agenda.

Wind and Shadow is full of plot twists and turns.  I was shocked at some points, there’s really a lot of dark material, between the blood thirsty vampires, and the very freaky plans of the head vampire, Malcome de Sade.

I really relish the whole witch verses vampire theme.  I am excited for the next installment.

After her first heartbreak, Tori found solace in two things: reading romance novels and listening to an after-dark radio program called Lovers and Other Strangers. Throughout the summer and fall of 1990, the new kid in town found reading fiction and writing her own short stories gave her a much-needed creative outlet. Determined to become a published author, Tori amassed stacks of notebooks and boxes of filed-away stories, most only half-finished before another idea would overtake her and demand to be written down. Then, while on parental leave with her second baby, one story formed and refused to be packed away. Between teaching full-time, parenting, and life in general, it would take almost seven years before the first novel in her first trilogy would be completed. In the process, Tori finally found her stride as a writer.

At present, on her off-time, Tori not only enjoys reading, but also listening to an eclectic mix of music as she walks the family dog (Skittles), attempts to turn her thumb green, or makes needlework gifts for her friends and family members. She loves to travel, collect and make miniature furniture, and a good cup of tea during a thunderstorm or a blizzard. Under it all, she is always intrigued by history, the supernatural, vampire and shape shifter mythology, romance, and other dangers.

We received this book for free from the publisher for an honest review.

2 thoughts on “Wind and Shadow (The Talbot Trilogy Book 1) by Tori L. Ridgewood”