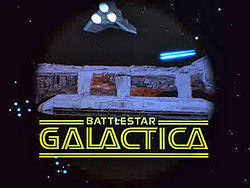 This  week I thought I’d do something a little different. I am a fan of the Ragtag Fugitive Podcast which is an episode commentary of the original Battlestar Galactica. Remember that one? Dirk Benedict in his pre-A-Team days. Many of our dear readers may have caught it in re-runs; if we’re old enough we saw it when it originally aired. I refuse to reveal which category I belong to. Anyhow, Ragtag Fugitive is a fun podcast by Rick Moyer and Chris Clemente,-with the occasional guest- covering the world of the old school Battlestar Galactica. You can catch it on iTunes or Stitcher. I have greatly enjoyed it, so I thought I would shoot a few questions over to its hosts and ask them a bit about  podcasting and their feelings about Battlestar and SF in general. Enjoy.

1. How did you get started in podcasting?

CHRIS: Well, I became a part of the Treks in Sci Fi community, and became friendly with several of the members. I thought after listening to the podcast for a year or so I felt that I had something to add. I asked Rico (the head cheese at TISF) if I could cover the Planet of the Apes series, one of my favorites. He suggested I get with Rick Moyer, who is a HUGE fan of the Apes. We recorded it and he edited it, and I was off. Pretty soon I learned how to use the software, got some better equipment, and I was editing them on my own. I have done many guest spots on TISF, and in the process have gotten to know many of the other members of the community, and made some great friends all over the US and UK. Just this week I brought in a long time friend of mine into the fold with Rico and we covered Conan. It’s been very rewarding.

RICK: Many years ago my family gave me a video iPod and I was thrilled!  I heard about these things called podcasts and that they were free.  SO, the first thing I did was search for Star Trek.  I found Rico Dostie’s podcast Treks in Sci Fi.  The podcast was awesome and he encouraged his listeners to send in comments and anything else they felt like.  It took me a coupe of months but my first submission was a poem about Captain Kirk.  Then it kind of all started to snowball.  My wife and I guest hosted for Rico on mother’s day and talked about women in sci fi and we caught the podcasting bug.  We started our own weekly podcast called Take Him With You about 4 years and 7 months ago, and haven’t stopped since.  Now I guest host on Rico’s program, am a guest on the  Trek Mate Family Podcasts and do the Ragtag Fugitive Podcast with Chris Clemente.  In the Fall I’m starting a Seaquest podcast with my friend Jeff Jobb.

2. What made you decide to do a podcast about the original Battlestar Galactica?

CHRIS:  I’m sure  Rick’s answer will be similar, but the long and short of it that there was a guest spot needed on TISF and I suggested to Rick that we cover “Saga of a Star World”, the pilot movie of BSG TOS. We had a blast doing it, and I mentioned to Rick that I continued watching the show on Netflix and was loving it again. We had been looking for a project to do together and the timing was perfect to start it. We decided to rope a bunch of people in to do it with us and it’s been very fun having all these different voices participate. I have been very surprised with the fun I can have chatting over Skype with a couple of geeks over a 35 year old show. It’s really like going back in time to being 15 in my living room with my geeky friends and doing the MST3K gag on a TV show.

RICK: I have always loved the original BSG.  I’m old enough to have watched it when it aired and never missed a show.  When Chris and I were chatting on iMessage one day we tossed around some ideas and hosted the pilot episode on Treks in Sci Fi.  We had so much fun we decided to cover each episode and ask guest hosts to watch with us.

3. What are your feelings about the differences between the old Battlestar and the newer version?

CHRIS: I was very young, around 4, when BSG TOS began. I was attracted to it as a kid because to my little mind it was like watching Star Wars on TV. I of course saw it again and again in re-runs over the years and enjoyed it, in spite of it’s 70’s cheese factor. It was very ‘space opera’, and as a young Star Wars geek, that suited me fine.When I saw the 2003 miniseries of nuBSG, I really loved it. It fit in with my sensibilities at the time, and I have always enjoyed a darker view in sci-fi. I know many BSG purists didn’t care for it, thought it was too dark, sexy, violent, etc….but I guess I never saw BSG as a sacred cow. I am always open to reboots, as a 30 + year comic book reader, I am so used to characters and situations and origins being played with that I don’t mind. A new view on an older character or series can be very refreshing, and TNG vet  Ronald D. Moore is just a wonderful writer, and I thought the finale “Daybreak” had some of the most touching moments I have ever seen on a TV show. The fact is, the old stuff we love is still there on our shelves, and a different take on Star Trek or Superman or BSG does not negate our love for that stuff.

RICK: I watched the new one, it was much more realistic, hard hitting sci fi.  BUT I am a fan of campiness.  Original BSG was more campy, kid orientated.  Each show stood on it’s own most of the time and had real heroes, it was a struggle agains good and evil.  The new BSG, in my opinion, was much more grey.  Not a super fan of it.

4. For you personally, what makes an SF movie or series stand out as a classic?

CHRIS: I think it has to be in re-watchability, and if it holds up many years past the era it was made in, rather than be an obvious reflection of it. I think it also has to do with standing out from the crowd, breaking new ground, taking a risk…Forbidden Planet and The Day The Earth Stood Still tackled issues no sci-fi film was doing back then. I have gone back to so many things I had fond memories of, “Land of the Lost” for example, and have lost steam a couple episodes in. In contrast, the ST:TNG blu-rays have been coming out, and in my house, everyone watches. There is anachronistic stuff of course, but the stories, characters, and messages still hold up. I do wonder how our recent big blockbusters will be looked at in 20-30 years…because special effects will always get better. The shark in Jaws is so obviously fake, but that movie is a classic because the story and the characters are still engrossing.

CHRIS: I have really only begun to dip my toes into this world, so not really! But I have been cooking up another podcast for about a year now, and I think I have finally found the person to do it with..and I’m hoping that we can continue the Ragtag Fugitive Podcast past the end of the series, we just haven’t figured out in what form that would be!

RICK: I am a huge geek. I run a multi media business from my home called http://www.moyermultimedia.com where I have built a state of the art recording studio.  Check out my sci fi ambience albums on iTunes by searching for Stargazer, MW-ORBIT and Robot Gunslinger Cowboy, just type Rick Moyer in the search box.   I write parody songs about sci fi over at http://www.startrekparodies.com, my wife and I do the weekly Take Him With You podcast where I have systematically turned her to the geek side.  We have 230 episodes that talk about our geekiness and our faith.  It’s unique, that is for sure.  I have a huge amount of cool geeky photography over on Facebook at Facebook.com/rick.moyer and you can follow me on twitter @moyer777

Site: http://ragtagfugitivepodcast.com/
Availability: Stitcher, iTunes
Audience: Safe for all audiences, no sexual content or strong language.
Connect with R.K.: I love hearing about new podcasts and new stuff in the SF/paranormal romance field. If you have a suggestion for a podcast or a great new read feel free to follow at @mrsbookmark. I’d love to follow you!