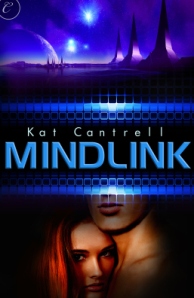 Kat Cantrell is the author of MINDLINK, a Science Fiction Romance as well as the contemporary romance MARRIAGE WITH BENEFITS through Harlequin Desire and the upcoming THE BABY DEAL through the same line. She’s a proud member of Romance Writers of America®. Kat was the 2011 Harlequin So You Think You Can Write winner and a 2012 RWA® Golden Heart® finalist for best unpublished series contemporary manuscript.

How did you start your writing career?

I’ve been writing as far back as I can remember! I always wanted to do it as a career, but I never took steps to get there. When I became a stay at home mom in 2009, I realized I had a unique opportunity to see what could happen. So I started researching everything I could about the publishing industry and dove in. My first book was a space opera with paranormal elements that went nowhere. I decided to try my hand at contemporary at the same time I was working on MINDLINK because I figured I should have as many irons in the fire as possible and besides, Nora Roberts does both. I can too! Contemporary just happened to be what got my foot in the door first when I won Harlequin’s So You Think You Can Write competition.

Do you remember the first book you ever read as a child?

The Berenstain Bears Summer Vacation. I didn’t discover Science Fiction until I was in fifth grade or so.

You’ve written contemporary romances. What made you decide to do a science fiction romance?

Science Fiction is actually my first love. I always thought that’s what my writing career would hold and that’s what my first book was as well. It’s just a tough market and I knew I needed to do something else to make “author” a viable career. Turns out I love writing contemporary too!

I was enthralled with your heroine, Ashley V. She’s an unconventional choice as a main character; an actress with a faltering reputation. A bit shallow it at first appears, yet you manage to redeem her from being unlikeable. How did you go about designing your characters?

Oh, thank you so much for saying that! I loved writing Ashley and I tried to make her as three-dimensional and real as possible because the story is so fantastical. I always use character archetypes as a basis and I knew I needed a certain kind of woman to match with Sam, whom I already had in mind as the hero. So I take the qualities that the archetype typically exhibits and then explore how that fits with the hero’s journey I created to frame the plot. I’m not exaggerating when I say I had seventy-five pages of notes on MINDLINK before I started writing it!

One of the strengths of MINDLINK is humor. Comedy is its own craft. Is this a natural part of your writing voice or something you worked very hard to craft?

I’ll probably be shot for saying this, but it comes pretty naturally.  I’m a bit of a smart-aleck and a lot of things Ashley says I’ve either said myself or could imagine myself saying. I like humor in the stories I read so I certainly wanted to include it in my own.

Do you have plans for any future Science Fiction Romances (SFR)?

I do have the loose plot in mind for Natalie’s story, one of the secondary characters in MINDLINK. I hope to have that in the works soon!

Tell us a little bit about your current releases.

I have two contemporary titles released earlier this year with Harlequin Desire, MARRIAGE WITH BENEFITS and THE THINGS SHE SAYS. THE BABY DEAL will be released in August and it’s contemporary with a tip of the hat to my science fiction self—the hero is an aerospace engineer trying to build a space ship for civilian space tourists (think Richard Branson/Virgin Galactic).

Any classic SF films or series that you love to watch? Who would you cast in a remake?

I love them all! I really liked the Colin Farrell remake of Total Recall, which is saying something because the original is one of my favorite movies of all time. I’ve seen every episode of Buck Rogers many, many times and I would be thrilled with a Joss Whedon remake with a woman in the lead role. I’d cast Amy Adams in it in a heartbeat because she brings a great combination of wonderment, likeability and heavy-hitting emotion to every role.

If you were to serve as the Earth ambassador to an alien planet, what would you want to share about humanity?

I actually had to answer that question for myself when writing MINDLINK! I tried hard to think about what sort of representatives we might send as ambassadors. That’s how the idea came about to include a contest winner because Americans tend to commercialize everything…but the rest of the ten represented what I think are the greatest human achievements: genetics, physics, engineering, theology. These are all areas of enormous complexity and understanding that we didn’t have even a hundred years ago.