The CW’s new series, Arrow, is based on the Green Arrow comic books. Part of the DC universe, Green Arrow trends dark and is often considered to be an archery based imitation of Batman. There are many similarities, a rich playboy with lots of gadgets who is a vigilante, and all of that is carried over to the televisions series.

Departing From the Comic
Departing from the comic books, the Arrow of the TV series has been shaped and molded by five years of being shipwrecked and surviving on an island. His father sacrificed his life to ensure he would survive. The father also  set him on a mission to right his own past wrongs and the wrongs of others on a secret list of the corrupt elite in Starling City. 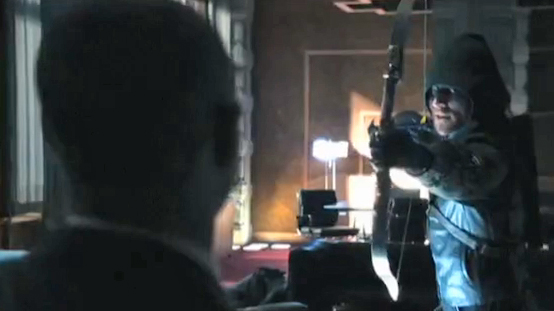 The Damaged Anti-Hero
By casting the Arrow as a very young man with a tragic past, the CW has also clearly retooled the character for the young adult audience,. He is the damaged anti-hero that appeals to young girl fantasies and my inner teen must still be alive and well, because he appeals to me as well. It might have just a little to do with actor Stephen Amell. He’s a long working actor in Hollywood, but I think this is his first starring role. The show wisely takes advantage of many opportunities to show off his impressive… strength and talent. The show forces him to go back and forth between the serious vigilante, the loving son and brother, the playboy of his past, and the beleaguered shipwreck survivor. He pulls that off pretty well.  I don’t normally like the flashback technique, but in this case the question of what happened on the island adds a nice layer on intrigue. The show also provides plenty of impressive fight scenes and action adventure.Perhaps the weakest aspect of the show for me is the soap opera feel of the twisted mixed up relationships. It makes me fear I will weary of the show pretty quickly, but for now I’m indulging in the scenery. I do love the way the Arrow wields his bow.

Arrow is on the CW at 8PM on Wednesdays. If you need to catch-up, full Episodes are available on their website.

Anyone else watching the series?