Today, Tia Nevitt joins us on day three of her blog tour. She is the author of The Sevenfold Spell, scheduled for released September 27 from Carina Press. She’ll be available to answer questions this evening and will be giving away an e-book late tonight. Find out more about Tia on her website and blog. 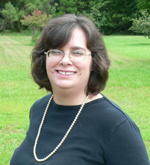 Thank you, Charlie, for indulging me in my trip back in time. For previous installments of this blog tour, and to read all the excerpts from The Sevenfold Spell in order, pop over to Jenny Schwartz’s Acquiring Magic blog (you might have to scroll down) and hop along. Here is the complete schedule.

In my early 20s, I started my first truly original novel. It was a story about a minstrel who helps a young noblewoman rescue her true love, except the minstrel was in love with the girl, and the girl’s love was actually a pretty evil dude. So it was really a love story about the minstrel and the girl. It was called Oath of the Songsmith. I tried to break some tropes with this novel. Elves were diminutive and incapable of learning any science—otherwise they’d risk losing their magic. Ogres were mute only because they were telepathic. Goblins, dwarves and trolls were pretty much according to all the tropes, except dwarves were technological and had even invented the railroad. The villain (besides the lost love) was a witch who had sworn her soul to darkness.

It was a novel out of its time. Had I been able to finish it and get it polished up by about 1987 or so, it might have had a chance. But it was the late 90s instead, it was a mess, and elves were passé. I sent it to one agent, read that one rejection, and set it aside forever.

Here’s the opening from that book. I’ll dump it in here as-is (I haven’t looked at it in years) and I’ll pick it apart.

Chapter One – To Catch an Elf

Kate paused outside the house of the crone.  It looked forbidding enough.  The overgrown yard was suitably dark and shadowy, with looming trees and hooting owls.  A convincingly ominous scent hung over the place, a combination of damp, rotting earth and cloying, fragrant herbs.  The two visible windows of the squat house glowed a dull yellow through their oilcloth coverings, like two leering eyes (NEED A BETTER METAPHOR).

Yet somehow, the yard and house lied.  Yes, it was true that a witch was supposed to live here.  And to the uneducated eye, it looked like a witch might live here.  But Kate had dealt with a real witch, and she quickly came to the conclusion that a real witch, with access to real power, would not be content to live in such squalor a squalid manner.

Enough of that. Tomorrow, we’ll move away from talking about me and my writing. I’ll begin by discussing fairy tales over at Talina Perkins’s Bookin’ It. Until then, here’s the next excerpt from The Sevenfold Spell:

“You will be well-paid,” the constable said, “as soon as it’s destroyed.”

“What about Willard?” I asked my mother, hoping to salvage my injured pride. Willard wasn’t much to look at, but there was no question he was mine.

“Willard!” She snorted in disgust. “I’ll believe he’s willing to marry you when I see you march down the aisle.”

They brought out the spinning wheel and flung it into the back of the wagon. Mama and I both winced as it crashed atop the heap of spinning wheel parts. I had no love for the contraption but had spent many hours dusting the spokes, polishing the surfaces and greasing the axle. The constable’s men, however, had no regard for its fragile structure, its delicate beauty. They had no care that our lives depended upon the simple wooden structure.

The fairy darted out of our shop and hovered near us. She aimed her wand at our spinning wheel and a burst of colors flew out. The colors hit the wheel and buzzed around it like angry bees. When they dissipated, the spinning wheel collapsed into all its various parts, no longer distinguishable from the wreckage surrounding it. I blinked away tears I’d never expected to shed and thought of my fellow spinsters scattered all over the city, mourning, as we did, the loss of our livelihood.

My mother raised her arm to swat the fairy. I grabbed her and hissed. “Remember Widow Harla!” Widow Harla had attacked the fairy with her broom, and she had received the fairy’s vengeful spell. She was still unable to speak.

I felt the tension in Mama’s arm relax. The fairy turned, glared at us and buzzed out of our reach.

I’d love to hear from you! At the end of the day (just before I shut down for the night), I’ll pick a random commenter for a free ecopy of The Sevenfold Spell.