I’m super excited to share an exclusive cover reveal with you today. Why am I excited? Well the cover is gorgeous! And the book is some of my favorite things. It’s gay scifi romance, it’s the first in a new series, it’s by an awesome author, and it’s about two tough soldiers fighting for survival. Too make this cover reveal even more special, we have some comments on the design from cover artist L.C. Chase. So without further ado……. 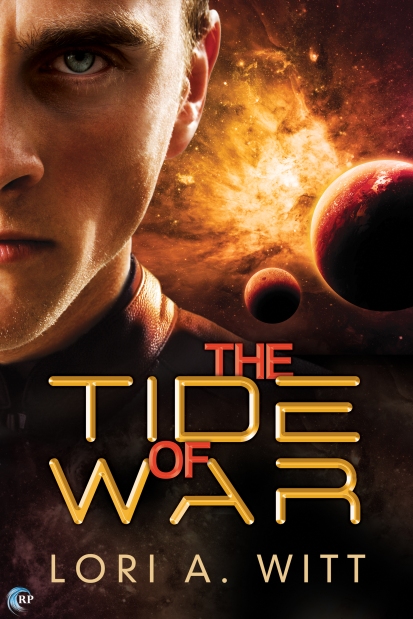 From the Cover Artist

The Tide of War Cover Notes by L.C. Chase

I always have fun with Lori’s cover art forms. She has a way of adding her own personal narrative into a story overview that makes me laugh every time. 🙂

Some key points I had to work with for The Tide of War were a space station orbiting an alien planet, something like a Death Star but smaller, with a dark and suspenseful tone. There are fighter pilots and aliens and wars and all things outer space.

I tried a few initial concepts: one with a fairly stark, cyantrope curve of a plant, skydust and a couple meteors, heavily on the solid black side; one with the horizon of planet in space and the space station falling off the edge of the page—except my space station looked more like a satellite *g* —and lastly, red-toned planets and starfields beyond the profile of a serious looking man. The crew decided a person on the cover would be the best choice, since the humanity of the story is key to the book’s theme. However, the particular model I’d used wasn’t quite right.

Off I went in search of handsome men with serious, foreboding expressions. Two I felt fit the bill, one of which is the model you see now on the final cover. He was just so intense looking, so perfect—almost. In the original photo he’s wearing a white T-shirt. That wouldn’t do for a fighter pilot, so I went back into the stock photo archives in search of some sort of leather jacket that might work. I found one but it had white stripes on it. A little photoshopping later and now I had what I wanted.

With the art worked out, it was time to fine-tune the typography. I’d only tried two options for fonts, and the one you see now was the winner from the get-go. There was some back and forth on color and effects until we got it down to where everyone was happy, but more importantly, Lori was happy. Which of course, always makes me happy. 🙂

The Tide of War by Lori A. Witt

Lieutenant Commander Kyle West is one of Earth Fleet’s greatest fighter pilots. Each day he leads his squadron into battle over Earth’s cities in a seemingly endless war against a vicious alien race, defending his home and his loved ones.

Millions of miles away, the Fleet’s Elite Squadron attacks from another angle, engaging the enemy on its home turf. Casualties are high, and the Squadron needs more of the Fleet’s very best. But joining the Elite is a death sentence—a surety Kyle isn’t willing to face. Until a devastating attack wipes out the family he refused to leave.

Commander Andrei Dezhnyov, an Elite Squadron gunner, isn’t sure what to make of the cocky new American pilot. Kyle is equally uncertain about the snarly Russian, but as they warm up to each other, their tentative alliance becomes a deep bond that endangers them both after a daring—and disobedient—rescue reveals secrets that call into question everything they ever believed about their enemy. Andrei’s and Kyle’s silence on the matter is something the Fleet’s superiors would kill to ensure.

Tides of War will be released next June, but it is available for Pre-Sale on the publisher’s website now.

My thanks to Riptide and LC Chase for this sneak peak at the cover.