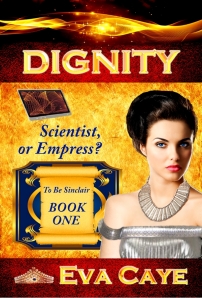 Be an Empress AND I have my own laboratory? I love you.

I ultimately devoured this story. Read it straight through, ignored every other book I was to read, slurped way too much soda, and have a belly sore from flopping back and forth on the bed. This is what I call a Delightful Surprise with a capital D and S. I was feeling pretty neutral on the excerpt. I’ve been in an exhausted funk after finals, life, and work. Too many books have been flashing before my eyes, worlds and characters becoming a muddled mess. So when a Delightful Surprise pulls me from that funk, I have pretty much stepped out of reality completely.

“Dignity” is the first part of the “To Be Sinclair” series, a series that I will be stalking from now on. The story takes place in a new trendy futuristic world. I mention trendy since this is the third time I’ve noticed popping up in romances: Regency/Victorian world in the future. I have no idea where it’s stemming from but I love it. It’s seems to be an offshoot of the steampunk world, a kind of alternate world? I’ve seen this in a zombie romance book (sounds weird but completely awesome-”Dearly Beloved” by Lia Habel) and in one of the recently award Nebulla books (I haven’t finished it but so far I can say that the award was very much warranted – “Glamour in Glass” by Mary Robinette Kowal). The most common thread in these stories is that something apocalyptic happened to earth and the survivors went back to time towards cultural ideas but way forward in technological advances. I absolutely adore it. I welcome a change in the sci-fi atmosphere. This fusion fills me with giddiness, combining two of my favorites: Regency/Victorian romances and science fiction. As much as guys can poo-poo it, I raise a teacup armed with nanobot assassins at them.

Felicia is one of my favorite heroines. She attends a college to pursue her scientific interest in engineering along with grace, manners, and stationary importance. She’s super smart, calculated, and yet she is sensitive. There was a description that she was a wallflower but I disagree with that. I am a wallflower. Felicia is no wallflower. She is that quiet, super-duper intelligent girl in class that your too intimated to ask for help on an equation. Not because she’s mean, but because she feel like your neurons in myelinated in molasses when she explains anything. Oh and she’s super sexy. This is a brazen vixen. The minute her cherry popped there was no stopping the sexual explorations with the Emperor.

Oh right, mild spoiler alert. She ends up with the Emperor but if you read the synopsis, you would have gleaned that. Don’t despair! Even though you know they end up together, the magic is how they end up. It is so ultimately sweet and romantic that I dare you to stop smiling. Or tilt your head as you sigh.

The main focus is on Felicia so I understand her more. The Emperor’s character is gleaned from the digital offerings he leaves her and his actions. Simply put, he’s a sensitive man. Paired with Felicia’s inner strength, they make a great ruling couple. As evidently seen when shit goes down towards the end.

The bulk of the story is courtship and the hardships they experienced. It should have come off as drawn and tedious, but the way Caye rights it makes it flow so well. It’s written in a matter of fact mode with delicious tidbits sprinkled throughout. Very much like Felicia’s character. By the time you get to the chaos, you feel certain that no matter what, their love will stay strong.

Oh and the Emperor gave Felicia her own laboratory as a wedding gift. A lab. As a gift! Swoooon.

If you’re a sucker like me for common girl becomes royalty kind of stories, then you shall enjoy it. If you like it when the heroine puts her own passion for science before love, then you will really enjoy this. If you have ever analyzed sexual positions from a book and shared it with your partner, then oh you will enjoy this Delightful Surprise.

This book was provided by the author for an honest review.