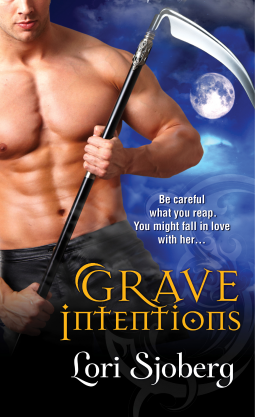 When he is your sexy next door neighbor and he’s there to watch the Dolphins game with you. In Lori Sjoberg’s Grave Intentions, David is the senior Grim Reaper in the Orlando Florida area. He was sentenced to become a Reaper when he died with a soul that was not pure, but not evil. He is working his way toward salvation one soul at a time. He’s been doing it for decades—long enough to learn to shut down his emotions—at least until he meets Sarah. Sarah has thrown all of her efforts into scientific research to battle her fear of becoming as crazy as the rest of the women in her family. Grandma Pearl claims to see spirits and get premonitions, but that’s all crazy talk to Sarah—until she meets David and can no longer deny that not everything can be explained by science.

Sarah and David’s story is romantic and fun with a healthy dish of impending doom. What would a book about the grim reaper be without at least a little doom?  The story is an easy read that will keep you turning pages and rooting for love.

What I loved about the Heroine: Sarah is a thoroughly modern girl. She’s not afraid to make the first move and she faces problems head on, but she also knows when to trust her heart and her instincts.

What I loved about the Hero: Despite years of pretending to shut down his emotions, David is clearly still at the mercy of his own conscience. He’s haunted by his past in the Korean War and accepts the consequences of his actions and doesn’t use good intentions as an excuse to complain about his fate.

More great stuff: David leads a team of Reapers, all of whom have sinned in some way, but have been given a chance at redemption. They are an interesting bunch and I’m already anticipating reading more Reaper books in the future. This will probably sound a bit morbid, but I also loved the constant litany of death that ran through the story as David was training, new reaper Adam. We get to know David through his relationship with his trainee, but it was also just a little bit of creepy fun to see how many unique deaths the story could provide and to explore the perils of life as a Reaper.

I recommend this book for anyone who liked the premises of the TV series Dead Like Me or Reaper but wished for a less self-absorbed protagonist. I also think fans of Sherrillyn Kenyon’s Dark Hunters series will love this book. Grave Intentions has a much more modern vibe that i really enjoyed, but it has at its core, an immortal hero looking for redemption and finding it through love.