How cool is it that Fantasy Friday just happens to fall on Valentine’s Day? It’s freaking awesome!

So, looking for V-day inspiration I Googled, alot, and found beaucoups images of Cupid with his cute curls, babyish physique, often portrayed in a diaper– the uber icon of romantic love. Really? I can’t fathom the hype. 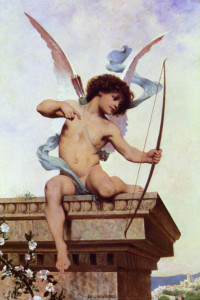 I prefer Sherrilyn Kenyon’s description of Cupid <ahem> Eros–he doesn’t like the name Cupid. Youthfully handsome man with a military haircut, dark brown goatee, wearing black leather and riding a motorcycle. Now that’s a God of Love I can embrace.

After spending too much time looking for pictures of biker Cupid, I was disappointed not to find one. Downhearted, I plunked over to YouTube looking for, you know, love songs and what-not. Disney tunes popped up, Beauty and the Beast being the most prevalent.

I’ve always loved the story of B&B. I have the French faery tale by Marie Le Prince de Beaumont downloaded in my Nook and it’s the inspiration for an upcoming WIP. While listening to the lyrics of  Disney’s B&B, I realized that the transformation of emotionally tortured, deeply scarred heroes is one of the core elements that appeal to me in romance stories. I’m a sucker for stone-cold hearts thawed by the power of love.

Sometimes, it’s the anti-hero that grips me like in Phantom of the Opera. Phantom is the Seducer. But, I see him as the man who truly loves Christine. Though it breaks his heart, he lets her go, knowing that she’ll have a better life without him. No HEA for him. His sacrifice leaves me a little heart-sick.

But, what is V-Day if not about expressions of love?

One of the most commercializes tales of love with a happily-ever-after is Cinderella. The Bros Grimm brought it to the masses and it’s been revamped and retold  as many times as there are stars in the sky.  My favorite is EVER AFTER starring Drew Barrymore.  She plays, Danielle,  a feisty, sixteenth century, young woman mistreated by her step mother (Angelica Houston) and falls in love with a prince.  Although Danielle’s circumstances are grueling, her spirit is never broken–even when she’s sold into servitude. What’s great about this movie is that Danielle saves herself from her circumstances. She’s empowered. She doesn’t wait to be bailed out. There’s even a hilarious scene where she has to rescue the Prince.

The best verbal exchange in the movie …

Danielle: A bird may love a fish, signore, but where will they live?

Leonardo da Vinci: Then I shall have to make you wings.

I love this because it reminds me that love isn’t easy and sometimes you have to get creative to make it work.

My most cherished  V-Day was when Professor X hand-made me a Valentine’s card because he was still recovering from a long illness and not able to go shopping. He isn’t a poet, so it wasn’t a sonnet or ode professing that my eyes are as bright as starlight and my breath fresh like wintergreen. Thank god, because I would’ve cracked up laughing and thought it was a joke. Rather, he simply wrote what was on his mind. And drew a few hearts on the paper. That card is a treasure, worth more than anything he’s ever bought me.