What exactly is “Sky Dancing”?

In my latest release, Sky Dancers, the hero Angel becomes a member of an elite performance group, status which gives him great privilege and respect in his intergalactic society.

But what exactly is “Sky Dancing”?

Imagine being able to soar and tumble like a Cirque du Soleil master acrobat. Picture being able to dance and flip on a balance beam like an Olympic champion. Now envision soaring and tumbling, dancing and flipping vertically while you push and maneuver others in your troupe ever higher…until you all explode like fireworks in one beautiful, masterful move.

When you’re a Sky Dancer, your mind is linked with the other members in your troupe so you can anticipate and visualize every move, every placement as easily as you would your own hand, your own footfall. Picture perfection.

And now, picture the Olympic Games, where you compete for the highest honors. Next, picture Burning Man where you join a rowdy celebration of life among your own kind in the desert. This is the annual Sky Dancer Gathering, where each troupe competes for the Golden Sky Statuette. If you win or are a runner up, it can mean the choicest of bookings on the Class 5 planets. With a Golden Sky, the citizens of the Federation take note. You will be invited to perform at prestigious events. You will be able to name your own price. You will be able to buy your own Space Cruiser. No more public transport for you.

And if you lose? Well, there is always next year, and maybe your troupe leader purchased some of the winning troupe’s skills to complement your own. And just to be at the Gathering seems like winning, hanging out and celebrating what only Sky Dancers can do. Being able to converse in mindspeak without the fear of others knowing about the mind-meld chip’s full capabilities. To stroll around and buy wares from retired Dancers. To sit around and tell stories of the past year. Perhaps the best part of the Gathering, after the competition, is the welcoming ceremony, where you meet the newly-made Dancers, those who survived the implantation of the mind-meld chip, those who did not succumb to the madness.

I think the notion of Sky Dancing began after watching a Cirque du Soleil performance and I asked myself what more could the performers do and how could they do it? I went onto YouTube and watched all different kinds of acrobatic performances: gymnasts, Chinese acrobats, and other Cirque du Soleil moments. I combined these flavors, added a bit of the nomadic gypsy spirit, a mind-meld chip, and there you have Sky Dancers.

When we first meet Angel, my hero in this novel, he is a stowaway on a slave trading ship, hiding in the ductwork. The ship has just picked up a cargo of Exotics from Earth. While on the way to the auction arenas of Pernaan, these Exotics will be tamed or brainwashed, if you will. With one exception: Layla. Layla is pregnant and is not able to be sold into slavery. It is against Federation protocols.

These two meet and form a bond, promising one another they will reunite, and return to their home, Earth.

That’s all wall and good, but first they have to survive and then find one another within a whole federation of planets.

That’s where Sky Dancers come in. Angel, deemed too wild to be sold, is given to a Sky Dancing troupe where he begins his training. If he survives the training and the mind-meld chip, he will be given his freedom. Once free, he can find Layla.

That’s the plan, anyway. But we all know what happens to the best-laid plans…

Enjoy this excerpt from Sky Dancers where Angel first sees his troupe practicing.

As they approached the tent’s entrance, Angel grew quiet, wondering just what Sky Dancing looked like. The tent reminded him of a circus. The circus reminded him of trapeze artists. But when Meena lifted the heavy canvas flap and ushered him in, and his eyes adjusted to accommodate the interior gloom, he was stunned by what he saw.

The last circus tent he had been in on Earth was the traveling three-ring variety. This one was more like a one-ring, with no room for an audience. Its interior reminded him of a giant dunce cap and he grinned at the image.

But his grin changed to astonishment when he saw what the Troupe was doing.

The earthen floor of the practice ring was scattered with what looked like tiny trampolines, not more than six inches across, arrayed in apparently random placements. The Troupe used them as launching pads. They were hurling their bodies into the air, doing twists, tucks and flips, very similar to some of the gymnastic floor routines he had learned.

But the similarity ended there. Because not only were they doing twists, tucks and flips, but also pushing and lifting the others to even greater heights, using angles and gravity and momentum. One would jump, twirling into the air, making contact with an already-twirling torso, who was then pushed further into the air to connect with a third. As the first one began his descent, he was pushed by a fourth and kept in the air so he could perform more acrobatics.

Angel stood, frozen, awed by their skill and timing, trying to figure out what he was seeing and how they were achieving their astounding flights of acrobatics. It was as if they were juggling themselves, using the tiny trampolines as a juggler would use his hands. But the skill it required! He gasped when he thought one of the performers was about to fall.

“You see?” Meena said at his side. “Very little room for miscalculation.”

He glanced at her and then back to the Troupe, spellbound. “How?” he breathed.

Meena was pleased with Angel’s reaction. His tense muscles were bunched with energy, as if he were preparing to take his turn. Breathing a sigh of relief, she silently thanked the Bright Shadows. She had chosen well. If Angel had shown any sign of fear, she would have been forced to sell him.

“The one with blue hair is Ping, the stockier blonde is Bluu, and she’s working with Blade, the lanky one, who’s also her roommate,” she said.

Angel noticed Blade looked much like Bluu, only she was bony, all sharp angles with long legs.

“The only other woman is me. We fly the highest, and you men help us get up there. See the man over on the sidelines, gesturing? With the goatee? That’s Shrim, the man you’ll replace when you’re ready.”

Angel glanced at Shrim with interest. Meena’s voice had gone all soft.

“Come,” she said. “Let us see what my Troupe thinks of you.” She sent a soft mental call to the group, just enough to gain their attention, but not enough to break their concentration. She knew they would wind down the acrobatics when they came to the end of a stanza.

“Our routines are as tightly choreographed as any dance,” she said while they crossed the few feet to the ring’s edge. “During a performance, we use a flute and a drum to keep the rhythm. Some Dancer troupes use more music, but I prefer not to.”

Angel nodded as he watched them simultaneously pause in midair in order to simultaneously drop gracefully to the ground. “I didn’t tell you I’m a gymnast,” he said, his eyes never leaving the ring. “I have some skills, but,…” he shook his head, “…nothing like this. No, not even close.” 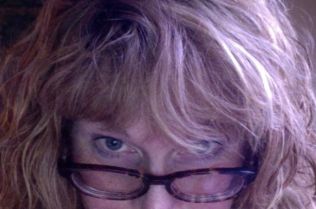 C.B. Williams lives in the Pacific Northwest with her husband, son, three dogs, four cats and the wild things that share their space with her. When she’s not writing, you can find her either painting, adventuring, or coaching other writers as the Manuscript Midwife. Visit her website for more information: www.cbwilliams.us or follow her on social media at Twitter: @CynthiaBryn or Facebook: / cbwilliamswrites.

You can get Sky Dancers at Amazon and other retailers.