Under all the Hollywood babble and glamour of geek celebrities, Wondercon is still a convention showcasing comics. Every time I brave the crowds at the exhibit hall, I always zone in on the artist alley first. The artist alley is rows of independent writers and  artists showcasing their recent works. I have purchased so many amazing prints, became a fan of so many. I am a fan of the huge companies but I’m even bigger fan of encouraging independent artists.

The artist alley at Wondercon was so massive that it was dizzying to the eye. It wasn’t even contained to just the Artist Artists. Independent artists and new works were scattered throughout the exhibit hall. From the tangled glob of geekness, these were the ones that caught my eye. Some of them are solid favorites that, no matter what, I always pause at their booth. I encourage everyone to check their websites. If you are also an artist or a writer, I encourage you to check these sites out for inspiration. I may end up at your table,too!

This is a little bit of a cheat since I had the press release information, I knew about this before even heading to Wondercon. I wasn’t able to visit their booth but I am so thrilled about this news! Golden Apple Comic Book Store is a long established comic store in Los Angeles. Located near Melrose Ave, they have a celebrity clientale and amazing events (this is where I was able to meet my favorite band Coheed and Cambris since they were releasing a comic book themselves).

The idea of a comic book store moving on to publishing their own books is awesome! Who better to know the potential of unique visions, than a store that retails comic books?

“Dead Future King” is a graphic novel adding another new twist to the zombie genre. The comic centers around a resurrected King Arthur into modern day UK.  Although I am not a fan of the Arthurian tales, the idea of a zombie version of King Arthur intrigues me. 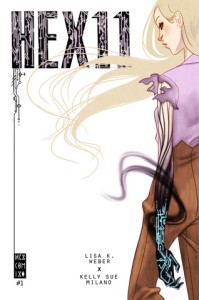 Even though I was rushing through the aisles throughout the weekend, this booth kept catching my eye with the artwork. It was bright vibrant and looked very SF to me. When I was able to chat with the women behind this comic, I was seriously impressed with how professional they were. For the first time as press, I was handed over a press packet from an independent artist.  That made a lasting impression on me.  I come away from these events loaded with information, so lots of gratitude on my part for making my job easier! The comic is created by Lisa K. Weber with Kelly Sue Milano on the artist helm. A third part of their team is Lynly Forrest. Talk about a trio of girl power. These  were solid and confident female creators and I did  not hesitate picking up their comic.

From the press release that I was given: ” In the world of Hex 11‘, humans, through the discovery of a new energy source called The Ether, have found they are capable of magic. As civilization moves from the Digital Age to this new Magic Age, corporate and federal bodies are concealing what they know, seeing an opportunity for a new level of control and unprecedented monetary gain…..Eleanor Kent, a young witch living in the Hex and apprenticing with  the eccentric Vera, a very powerful witch. Though she aspires to master the many facets of magic, she finds herself practicing basics and running errands. However, when one seemingly ordinary task places her in the crossfire of a black market warlock and a demonic mercenary, the excitement she had hoped for becomes all too real and all too dangerous.

Was it awesome? Yes! I devoured the comics I purchased in one sitting, immediately followed their social media accounts and I’m already looking forward to their next local appearance(Long Beach Comic Con!). This reminds of a miniature game I used to play called ” Malifaux”, mixed with Harry Potter, mixed with Buffy the Vampire Slayer, mixed with XXXholic. They pulled some of my favorite elements together and then added a bonus cherry on top: THE MOST ADORABLE KITTY CAT WITH WINGS. Yup. Instant fan made right here.

Another art that kept monopolized my eyes were from Melissa Pagluica. Surrounded by bright vibrant colors and styles, Pagluicia’s table contained a subdued and pretty aesthetic. Her table was constantly crowded by fellow admirers of her work. Once I wheedled my trhough, I was able to speak to the sweet and soft spoken Pagluica about her art. Her art is full of soft whimsy and imagination.

Her comic art involves a story so compelling that it helps ease the broken heart of a young women. Until the young women realizes that the story ends abruptly.And the author may not be able to finish it . For “Once Upon a Time” fans, this rings familiar right now doesn’t it? I also immediately thought of “Neverending Story”.

True to what I saw in the prints on the table, the comic is just beautiful. The style is just bleeping gorgeous. The only downside is that the young woman’s story has no dialogue so sometimes the panels may be a little bit confusing in terms of intent at first. The story is pretty sweet and I’m already curious to know what happens next. 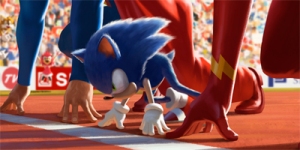 For a couple of years now, I have a been a huge fan of Mauricio Abril. Ever since I saw the illustration of Sonicthe Hedgehog waiting at the start line with Flash and Superman, I was fascinated. He really invokes story telling in his art. His pieces are beautiful and just so full of depth. As usual, his booth was pretty crowded so I managed some some talk so as not to take his time away from his clients. Amazing artist that I love sharing. Please check out his art, especially the Wonder Woman piece that he debuted at Wondercon.

Animals are very dear to my heart so I was thrilled when he started his Small Dogs Unite project! In addition to his illustrated books, he has been drawing dogs belonging to his fans with little snippets of their personality. I truly hopes he makes this into another illustrated book because it is just too sweet and amazing! check it out : http://www.smalldogsunite.com/

This was a last minute scavenger hunt. It took me three attempts to find her booth again. Squeezed tightly between two other artists, Diana Huh was a definite hidden treasure.It isn’t surprised to find that Huh’s influence is drawn from Disney and other animated works but she has a style of her own that is pretty solid in it’s own.

Diana Huh has created a very sassy and fun webcomic titled “The Lonely Vincent Bellingam”. Vincent is a on an uneventful sabbatical when he runs into an old friend. Who is a vampire. i’ve been working my way slowly thoroughly the webcomic and it is just so delightful.  Next time I see her in person, I will make sure to buy a print. Especially the really gorgeous one of the pair on a boat. 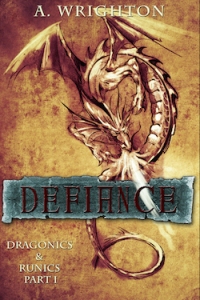 It is no secret that I am sucker for anything dragon related. It’s also special for me when I discover artists with their published books on hand. This is also another cheat since I am familar with writer already. It’s always a pleasure to bump into her again and catch up on what’s new.

“Defiance” is the first book in  the “Dragonics and Runics” trilogy. Runics are a class of magic wielders that can specialize in the elements of fire, heart, wind, and water(which automatically brings up “Avatar: The Last Airbender” just with dragons). Except the Runics are now legendery since their kind have been exterminated. Except rumor has it that there may be a Runic left. Another group doomed to extinction, the Dragonics (a group with the ability to ride dragons) are desperate to find the Runic to help unite the fragmented society.

For all the Star Wars fans,  this is one is a special bonus. He didn’t have a table at Wondercon but he mentioned that he shall be tabling at the Star Wars Celebration in Anaheim coming up this week.