More and more projects are campaigning in crowd funding websites every day.  It has resulted in a sort of “crowd-funding” fatigue where people are just tired of being called upon to contribute to more campaigns. Hence, I present a campaign that was successfully funded and should be on your entertainment horizon.

With a quirky title like “A Brief Moment of Time”, this documentary seeks to present a couple hours of time travel fun by exploring the beginnings of this popular idea. The documentary pokes various scientific minds while sorting out through the pop culture origins of the genre and even international viewpoints.

How are they going to fit all of this into a couple of hours?!?!?

Whether our first steps into science fiction were through books, movies, comic books, costuming,  or constant questioning in science class, time travel is a subject that everyone has experience.  Why it should hold such a strong grasp on our imaginations is another aspect the documentary will explore.

On a personal note, my pathway into science fiction has always diverged from time travel in some way or form. Whether it was through a thai dramas with time travel, reading “Phantom Tollbooth“, Rugrats, and now Doctor Who, this documentary definitely caught my attention. Documentaries are usually not my thing but when it comes to being connected to my geek passions, then I’m all ears.

For your viewing pleasure, I present a tiny little interview that was conducted with the team behind the project. I would like to thank the team for carving up some time to answer these questions.

Of all the people that were interviewed, who was the most sought after person?

BERTRAM: This is a hard question to answer! Folks like Bill Nye obviously had busier publicity schedules and took the most effort to get an interview with, but since the strength of our film is that it pulls in experts from all different fields, the most important thing was getting that diversity.

What are the long term goals for documentary?

BERTRAM: We’re on track to finish the film by next year and hope to screen it at a number of film festivals and comic cons, after which its home will be online! Ideally, we’re also hoping to launch a web series and interactive website for people interested in time travel – we have way more footage and information than we can fit in a film.

We want this film to attract people with all kinds of nerdy interests – whether in theoretical physics, pulp fiction, video games, tech or the history of TV – to learn and talk about how all those aspects of pop culture connect. If we accomplish that, we’ve succeeded!

Now that a documentary about time travel has been made,will there be documentaries on other science fiction aspects

GISELLA SAYS: There are so many aspects of science fiction that I love, and making this documentary has definitely sparked other ideas for future projects down the road. I’m really interested in the future of cybernetics and technology in the human body- I think it would be such a cool documentary topic!

WANDA SAYS: I’d love to do a documentary on Redshirts if there isn’t one already. We don’t have any plans set in stone yet, but the number of amazing people we’ve met who work in sci fi, and the amount we know now about how much we don’t know, certainly opens the door for other sci-fi documentaries.

(Writers Note: YES TO ALL OF THESE!)

What would you consider to be a “gateway” to science fiction? (i.e. a particular sci fi novel you recommend, a movie, etc)

BETRAM: Wow, what a great question. The most addictive Sci-Fi gets you to speculate about science and society and the future, and disaster fiction works pretty well for that. I really loved Snowpiercer last year. Some mainstream news channels stray into disaster fiction from time to time, so they can also work. 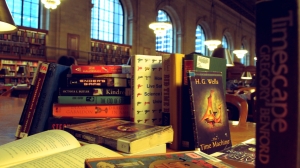 I couldn’t resist adding a fun time travel question and this question was passed off to the graphic artist on the team, MISSY BRINKS.

If you were to time travel right now, what three things you would take, who would you take?

1. Hand sanitizer (because I am NOT dying of the plague/smallpox/Spanish influenza or any other awful disease; I would also not distribute it to others to avoid causing a paradox.

2. Josh [my husband] because he’s the level-headed one.

[Producer’s note: Missy is already one of the most level-headed people I know, so they would be an A-team.]

3. Probably a notebook and a writing utensil if that’s not breaking the three-item limit.

How could I not end with a Whovian question? Editor, Danielle Creech honored us with her answer:

If the Doctor came and offered you a chance to go into the TARDIS,  would you say yes? if not, what would hold you back?

CREECH: Hell, yes! There are so many different places and times I would want to go, but specifically the streets of Victorian England, or the day that I was born.”

The requirement of having at least one Whovian on your time travel documentary makes it legit. From this small group of questions, I can tell the team is solid. Everyone seems to come from diverse backgrounds and ideas. I look forward to seeing this project come up onto the screen.