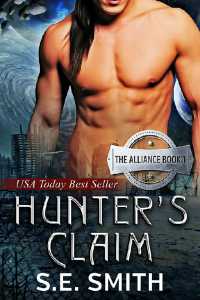 Hunter’s Claim by S.E. Smith is a great take on the alien warrior meets human woman trope. I love this trope in general, but it is especially nice to come across the trope within a story that truly puts romance to the fore. This was a new-to-me author, although she has many other books out, and the book is the first in a new series I’m already looking forward to.

The World
The first book in The Alliance series is set four years after representatives from the Alliance, a multi-world group of aliens, came to Earth in peaceful response to Earths exploration of space. They came in peace, but their sudden appearance did not bring out the best in people. It caused chaos. Fear and panic led to violence and devastation. The governments of the world lost control of its citizens and the cities have turned to a fend-for-yourself mentality that gives the advantage to criminals. The Trivator warriors were called in to offer humanitarian aid and to try to re-establish order.

The Setup
Jesse is a young woman with two younger sisters to care for. The siblings have lost their home and their parents and live in the rubble avoiding both the Trivators and the other humans. Both are dangerous, but Jesse doesn’t hate them. She just doesn’t know who to trust. She’s on the way back from searching for food, when her path crosses with a group of humans who’ve captured a Trivator and plan to kill him. When a slim opportunity comes to help him escape, she sets him free and manages to escape herself before he can stop her. It turns out that the alien, Hunter, was not in as much trouble as she thought. He’d let himself be captured and his cohorts were closing in on the building. Regardless, Hunter is impressed by her bravery and wants to aid her. He and his friends track her back to the shelter where she and her sisters were hiding only to find her gravely injured and one of her sisters ill.  In order to get her the medical attention she needs, the Trivators take them back to their base and Hunter claims Jesse as his amate and her sisters as her family.  From there, things only get better and worse for all of them. The girls like Hunter and his friends but aren’t so easily convinced to accept Hunter’s claim. These girls are clever and tough and the Trivators aren’t the only ones coming to the rescue through the course of the story.

My Thoughts
I really enjoyed seeing the girls challenge the warriors. They warriors were tough and powerful but kind and they respected the girls’ ingenuity and bravery. For me, respect is a super-uber-plus in any romance. There was plenty of depth and dimension to all of the characters and the world seemed interesting and consistent. There wasn’t a lot of serious, book-long conflict between the romantic couple. While Jesse resisted Hunter’s decision to claim her and to take her and her sisters back to his home world, she did so more out of fear of the unknown and concern for her sisters. And once she learned she could trust Hunter, a great deal of the conflict came from action and danger due to hunter being a warrior and from the girls adjusting or clashing with their new circumstances. I don’t want to spoil the plot, just saying this book is more drama than angst. It worked well for the story and for me as a reader. I loved both Hunter and Jesse. They seemed like two great characters that deserved happiness. Their relationship had equal amounts of sexiness and caring and I liked seeing how important family was for both of them and how important they came to be for each other.

I bought this book and thoroughly enjoyed it.

The Book Blurb
Jesse Sampson and her two younger sisters have lived a hard life on the streets of Seattle, Washington for the past several years. Four years before the Earth received its first visitors from space causing mass fear. Alone in a world gone mad with just her sisters, Jesse has learned to use the darkness and the remains of the city to survive and keep what was left of her family alive. She has seen the savage side of human nature and finds they are not much different from the aliens who conquered the Earth.

The Trivators have taken control of the Earth to prevent the humans from destroying it in their fear. A world of warriors, they are sent out by the Alliance of Star Systems to seek out new worlds. Their mission is first contact. They are to establish communication with the leaders of the new worlds they find and bring them into the Alliance. Any resistance is to be quickly subdued to prevent unnecessary death of the inhabitants of the new worlds they find. Their payment comes from the success of their mission.
Hunter is what he is called. A hunter, one of the elite clans of the Trivators who seek out those who resist. His abilities to track, capture and eliminate those who try to harm any warrior is renowned. He finds the tables turned when he becomes the one captured by a group of ruthless humans.

Hunter is shocked when a strange human female risks her life to help him escape only to disappear into the ruins of the city. He now has a new mission, finding the female who saved his life. He is determined to find her before she is damaged by others of her kind.

What he finds is a reward beyond comprehension to a Trivator warrior, a family. Can he convince Jesse that he can give her and her younger sisters a better life on his world? Or will fear keep her from accepting what he has to offer?