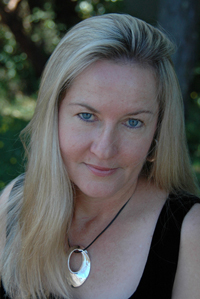 RK: What inspired you to become a writer?

I’m a lifelong romance reader, and I’ve always written. As a child I would write stories for fun and school assignments (I wrote my first “novel” at age 10). As I got older, my inclination to write was channeled into nonfiction, and I became a newspaper reporter. But the storyteller in me had to be expressed, and about 20 years ago, I started writing fiction again. I LOVE being an author. It is the best gig in the world.

RK: How do you approach world-building in your fantasy and futuristic worlds?

I start with a story scenario first, and then create the world that would allow that to happen. I take what we already know and accept, and twist it, turn it on its end. I pretty much just go with my imagination, but I also like to mix a little medieval with the futuristic. The futuristic element allows me to push boundaries while the anachronism challenges my characters. In practice, it means I write a blend of fantasy and sci-fi. I make stuff up!

RK: What do you think makes for strong heroines and heroes in your novels?

Courage. Courage defined not as the absence of fear, but the willingness to act despite fear. My characters face huge challenges, but they’re willing to do whatever it takes to succeed. Sometimes this means they have to make tough decisions. Some of my heroes and heroines have killed people. They are flawed and make mistakes, but at their heart, they are good people, particularly the heroes who will fight to end for the heroine.

RK: How have you taken advantage of the rapid changes in publishing to enhance your writing career?

Wow. My career is built on those changes. First was my decision to publish through ebook publishers rather than go the traditional route, and then to go Indie and publish my work myself. I’ve taken advantage of Amazon Kindle Direct Publishing, Kindle Unlimited, Createspace print-on-demand, and I’ve used Draft2Digital to distribute my books to Kobo, Apple iTunes, and Scribd. You can get my books many different ebook formats. I blog, send out an email newsletter, post FB, tweet. I write sci-fi, but I am not a techie, so I’ve had to stretch myself to learn things that are second nature to some people. It was a major victory when I figured out Mail Chimp, created a sign-up form, and sent out my first e-newsletter.

RK: You also have a non-fiction book, NAUGHTY WORDS FOR NICE WRITERS. Could you tell us how that came about?

The limitation of the English language is the first roadblock you encounter when you try write a sex scene. Other than “making love” (positive) or “having sex” (neutral), there are very few positive terms to describe sex. The English vocabulary is either crude, ribald, or clinical, none of which create intimacy and/or an aura of romance. A general thesaurus is little help because it doesn’t contain most of the categories of words that you need. The internet is no help, because even though there are lists, they focus on the crude and the ribald. So what’s an author to do, except write her own thesaurus?

Naughty Words for Nice Writers contains ways to describe kissing, body parts (sexual and non sexual), synonyms for desire and orgasm, lists of sex acts, as well tips and suggestions for how to write a sex scene—and some “naughty words” to avoid and tighten your writing. The thesaurus is available in paperback and ebook on Amazon and BN.com. 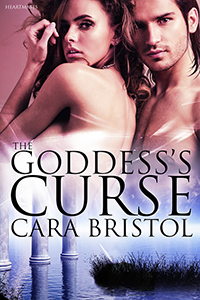 RK: Could you tell us a bit about your latest GODDESS’S CURSE?

The Goddess’s Curse was inspired by two concepts: First was the myth of the Amazon women warriors who lived their lives separate from men. They didn’t need men for anything except procreation. When a child resulted, they kept the daughters, but delivered the sons to the fathers—or killed them. Second was the eons old fear of and repression of women’s sexuality. I thought, what if women did have a sexual power that should be feared? So I created a world where women and women lived separately until the women came down with a contagion that made them irresistible to men. That said, The Goddess Curse is story focused and not sexual focused. It’s sensual, but the basic premise is the age-old battle between good and evil. It’s more fantasy than sci-fi, but it does take place on a fictitious planet.

RK: If you were granted one magical power, what would it be and how would you use it?

This is a toughie because every power I can envision has a serious downside. The ability to read minds would be very useful-but I think I’m better off not knowing what people really think. Time travel? What I if traveled back in time and changed history or traveled forward saw some horrible fate awaiting me. So…I think I would chose the ability to freeze time for a small moment, because in life there are those perfect moments that are too fleeting, that you wish you could enjoy for longer. But then again, there’s the downside, what if in freezing time for me, I froze it for everyone else—and someone is in the middle of something horrible and needs the moment to be over? Argh….

RK: If you had your very own starship what would you name it and what would its mission be?

I’d call it the U.S.S New Freedom and its mission would be to rescue refugees of war and oppression and repatriate them to places where they could live without violence.