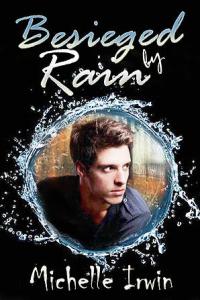 Besieged by Rain is book 1 in the Son of Rain Series by Michelle Irwin.

This is a companion book to Through the Fire the first book in the Daughter of Fire Series.

Clay is an elite member of THE RAIN, a secret organization formed to protect humanity from non-human threats. His family has served as hunters and executioners for generations. The rain views all supernatural creatures as evil monsters who must be destroyed.

But Clay strays from his family’s duty when he falls for Evie, a non-human, in high school. Two years later Clay tracks Evie down, desperate to see her again.

Evie has been running with her father all her life, but when Clay finds her they spend a few days together before Clay’s family finds him, and attacks her.

The story evolves with the two living separate and very different lives.

This is not a rewrite of Through the Fire very little of the story overlaps. This is much more an exploration of Clay, his family, his world, his issues.  As much as he LOVES Evie, he cannot stop seeing her as a monster, as a threat, and that is the conflict that drives his story.

This is an exploration of how he sees the non-humans more as victims, and less as a threat. Some of these creatures are very dangerous, but many are just fighting for survival, their families, their children…

He has to face how in many cases The RAIN forces these creatures to kill to defend themselves, when all they really want, is to survive.

The main issue I have to raise is that while I LOVED the book….it did  not offer the one thing I really wanted.  Plot movement past the end of Through the Fire. That was a cliffhanger, and this story actually ends BEFORE the end of that one.  So while it does not overlap or dive into the “retell” black hole, it also did not give even a hint to the next events in the series.

Because of this I am actually tempted to suggest reading this book before Through the Fire instead of the other way around.

This was a great read, it gives a great deal of detail about THE RAIN, Clay’s family, and why he acts the way he does with Evie.