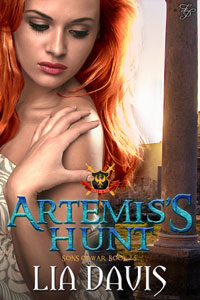 In Artemis’s Hunt by Lia Davis, The goddess Artemis has mourned her lover, her friend, and the father of her only child for 1,500 years.  But Zeus lied to her about Evangelos’ fate, her jealous father cursed her lover and sent him to live on earth as a mortal. When she discovers this she will not stop until she wins her lover back.

In a previous Sons of War story “Ashes of War”, Evangelos encountered Ashlynn and learns that he and Artemis had a daughter he never knew. He spent all that time blaming Artemis for his banishment, bitter, and hating all the gods.  But now he knows that she was also betrayed and lied to by Zeus.

They join forces to return Evangelos to his rightful place on Olympus and regain his status as a god of messengers.  All they have to do is find Hera and deliver a message to her from Zeus.

Positives: This is a very interesting blend of mythology, romance, and action that occurs between book 2 & 3 in the Sons of War series. It included plenty of character exploration, and some action to round out a short romantic tale.

The story of lost love, and forgiveness was touching as well as entertaining.

This is a short story that takes place between two of the longer novellas in the series, and as such depends on a great deal of existing back story about Artemis and Evangelos that had already been introduced. It also brings back characters from those prior books.  I read this story having not read either of the first two books, something I do not recommend, because there were several points where having that back story would have been very valuable.

As a short story it also didn’t have a complex or detailed plot outside of the romantic reunion between the two main characters, the hunt for Hera is not much of a hunt, that part of the story jumps from scene to scene without a lot of impact, and the conclusion is very abrupt.

Considering I went into this without any of the backstory, I found it to be a very interesting, unique, and well executed romantic short story.

It also introduced me to the world of the “Sons of War”, and I will definitely be adding those books to my reading list!