Today we have a Q&A with debut SciFi author Sean Benham. If the interview catches your imagination, swing on over to GoodReads to sign up for the print giveaway. 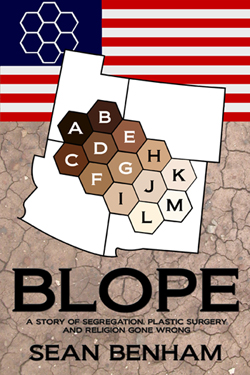 Q. Tell us about Blope…in 140 characters or less.

Phew! Just under the wire!

Q. Was there any particular moment that inspired you to write this story, or was it more of an amalgamation of experiences / ideas / your imagination run wild?

A. ‘An amalgam of ideas’ is an apt summary of Blope’s genesis. A loose series of concepts, visuals, names and plot devices had been swirling in my head for over a decade before being combined into a coherent story and committed to the page.

Thankfully, my experiences have very, very little in common with the world of Blope – although a cross continent road trip, featuring passage through the dull vistas of New Mexico, did serve as direct inspiration for the Southwestern setting.

Q. How did you come up with the idea of the Prefectures?

A. The idea of segregation based solely on skin tone, opposed to say ethnic background, religious belief or sexual orientation, resonated with me because it is the easiest, most base level of comparing and classifying people. I think evil works best when its simple.

Today, segregation tends to run along the lines mentioned above; ethnicity, creed, sexuality. You can adapt to a foreign culture, renounce a religion or choose to hide your sexual preferences if the need to conform into an unfamiliar group arises. They might be horrible choices to make and to live with, but the choices can be made and actions can be taken. There isn’t much one can do about the skin they’re born into.

As for referring to the segregated sections as ‘Prefectures’ instead of say, states, provinces or counties, I wanted a term that conveyed two things: A clear notion of boundary and a sense of the ‘foreign’, something that would let the reader know that the world of Blope is not quite our own.

Q. To what extent does Blope’s condemnation of plastic surgery, organized religion and segregation mirror your own opinions?

A. I’m not really for or against any of them. How’s that for a definitive answer?

Plastic surgery is interesting. The best work is that which goes unnoticed, aside from a vague ‘you look good’ impression. The thing is, it’s usually pretty obvious. As far as I’m concerned, so long as the recipients are happy with the work done and happy with their overall appearance, I’m all for it. If you want to turn yourself into a freaky cat-human hybrid go for it, you crazy weirdo.

I’m not a religious person. Truth be told, I think basing all of one’s beliefs on texts hundreds, if not thousands of years old is silly at best, dangerous at worst. However, I have a lot of respect for religion from a cultural standpoint. Not many stories have a positive, uplifting effect that is passed on through generations, and to me, that’s what religion boils down to. As long as one is free to practice whatever religion they choose then I’m all for it, especially if ‘none of the above’ is an option.

Segregation was going to be my most cut and dry answer – it’s bad! But, then I thought of ethnic neighborhoods. A Greektown or a Little India can be viewed as a form of segregation; groups of similar people congregating to live and work with those they feel comfortable with, having a shared cultural heritage. That’s not bad, is it? It doesn’t really seem like it to me. The problem with segregation is one of freedom. If people are free to live and work where they choose and they choose to band together with those familiar to them, so be it. Anytime someone is forced to live or work with those of their ‘type’, well, that’s when I can unequivocally say – it’s bad!

Q. If there were just one message or thought that you’d want a reader to take away from Blope, what would it be?

A. The ability to choose is great.

Q. If you go back in time and ‘create’ any famous sci-fi book, movie, TV series or otherwise, what would you choose and why?

A. That’s a tough question!

It’s also funny, original and it features Huey Lewis in a speaking role, all qualities I highly admire.

About Blope:
Son of Satan and Grandson of the Messiah, Billy Lopez was born with a sordid lineage, an ancestry that has been veiled since birth. Now, he’s a wanted man, forced into a harrowing world of extreme plastic surgery, black market pornography and organized religion gone horribly awry. BLOPE is the classic ‘Coming of Age’ story turned on its ear and shoved to the ground. 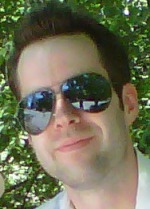 About the Author:
Sean Benham is a Toronto-based entertainment industry professional who has worked as an art director, graphic animator, writer and producer on everything from Emmy award-winning children’s television programming to heavy metal music videos.

Blope is his first novel, and available for purchase in both paperback and e-book formats via Amazon, Barnes & Noble, Lulu, Kobo, iTunes, Sony and Smashwords.